My friend Michal is an amazing cook; someone who maintains a carefully-curated collection of recipes — whether from yellowed newspaper clippings or magazines from the 1970s and old cookbooks with broken spines from constant use. But her knowledge of cooking is so deep, her technique so well-honed, we can make the same recipe and it will turn out completely different. She has shared a number of special dishes with me, including a molten chocolate cake; a lime mousse, gravlax and a couple of couscous recipes from her native French Tunisia.

Her family mostly settled in France after World War II, and a brother turned her onto Raclette, a peasant meal popular for centuries on the French and Swiss sides of the Alps. Farmers graze their cows in the mountains to make the cheese, aging 6 kg. rounds for 3 to 6 months. The Swiss canton of Valais is said to be the best source.

When Michal told me she had a racler, a device for melting the cheese, I remembered my first paid gig, as the clean-up helper at a neighbor’s Raclette party. In French, racler means “to scrape.” My neighbors had brought back a device that held a half-wheel of the giant semi-hard cheese, which exposes it to a very hot bulb. The heat melts the top-most layer of the cheese, which is scraped onto a warm plate and served with potatoes and garnishes.

It was my job to scoop up the dirty plates, scrub off the left-over cold melted cheese, wash and dry the dishes, and bring them back for the next round. It just seemed like melted cheese that you put on potatoes and eat before it gets too cold. I don’t remember the taste of it, but I probably wouldn’t have gone crazy for the meal, which sure seemed like a lot less fun than fondue. 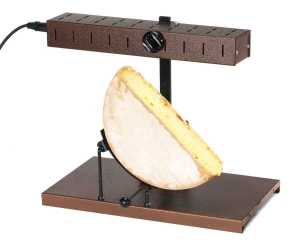 So when Michal invited me and a friend to share her Raclette, I had no idea what it could really be like. She brought out an electric grill the size of a toaster oven. It looks something like this:

Under the top-most grill plate is a space for eight flat metal shovels. Various kinds of semi-soft cheese, including Raclette, are placed on the little spades, under the hot grill. The heat from the iron surface melts the cheese, which is scraped off with a wooden spatula — then served with cooked potatoes and condiments.

The top of the grill is used to cook raw meats, smoked sausage, and onions, giving guests are wide variety small bites.

Potatoes and Shrimp for the Grill Top

Smoked and raw meets for the grill top

Michal went all out for this meal, which was originally prepared for her son’s birthday. Following the tradition, she fried fat from a duck breast on the top grill, then added marinated shrimp, various French sausages, duck and chicken breast, red bell peppers, onion slices, and Portobello mushrooms.

For the section under the grill, she laid out a spread of sliced cheeses: Raclette, Brie, Morbier, St. Nectaire and soft goat cheese, Le Grand Caprin. We built little mouthfuls on the spades: starting with sliced, cooked red-bliss potatoes, ham, a French salami, and, at her brother’s insistence, dry-cured beef similar to Bresciola, before topping them with the cheese.

After the cheese melted, we removed the little morsels and ate them with cornichons, pickled white onions, two kinds of chutney and sauces made with fresh herbs, sour cream and mayonnaise.

In between, we ate the grilled meats and vegetables, embellishing each bite with different mayonnaise- and cream-based sauces and condiments. Sweet and hot chutneys and the pickles helped break through the fatty meats and cheeses. Good crusty bread turns each bite into a great little sandwich.

Although the spread is Gargantuan, there’s no need to feel outrageously full while enjoying the meal. The grill cooks very slowly, and the cheese takes even longer to melt underneath it. That slows down the process, so you don’t actually shovel it down your throat, although it helps to use the spade.

Michal’s brother recommends a white vin de Savoie from Apremont, in the Alps of eastern France, which he describes as slightly effervescent. We drank a red Bordeaux called Le Prieure de Lalande, which Michal brought back from Paris, a red wine from the supermarche, too cheap (about 5 euro) to sell here for profit.

A crisp endive salad, served afterward, cut through the heavy feast. But Michal had a surprise for dessert: a ginger-laced Crème Brûlée!

All during the meal, I kept remembering what I was taught as a child: don’t play with your food. This rule was made to be broken — and it’s perfectly ok to do so when you’re eating Raclette.